I am using AnyBody to calculate muscles and joints contact forces (HIP and LSJ) of the pelvis, then applying all these loads to the pelvis in a FE model.

The equilibrium of the directional components of all of these forces results in a residual force, which should represent the inertia and weight forces that I didn't export from AnyBody, correct?

Are these inertia and weight forces of significance in the case of a normal gait movement?.. In the first place, I decided to neglect the inertia effect in the FE model. However, the residual forces after equilibrium are still of a considerable magnitude.
How come there are considerable inertia forces in the inverse dynamics during such a very slow movement of the pelvis?
How much are the residual errors in the AnyBody calculations if there are any errors?

forces results in a residual force, which should represent the inertia and weight forces that I didn't export from AnyBody, correct?

How come there are considerable inertia forces in the inverse dynamics during such a very slow movement of the pelvis?

It depends. Could you describe which data are you using? Is it something of your own? Could you look at the accelerations of the pelvis? Are they even? Sometimes due to the kinematic errors in the analysis you could observe spikes in accelerations, and this would lead to higher inertial forces and overloaded muscles. Is that something that you observe? Any chance you could upload a screenshot of the Model View at one of those moment?

Thank you for the feedback.

I am using this model from the AnyBody repository
Application/MocapExamples/Plug-in-gait_Simple model/FullBody.

The acceleration of the pelvis is attached. Did I extract it correctly?..the unit is in m/s2, right? 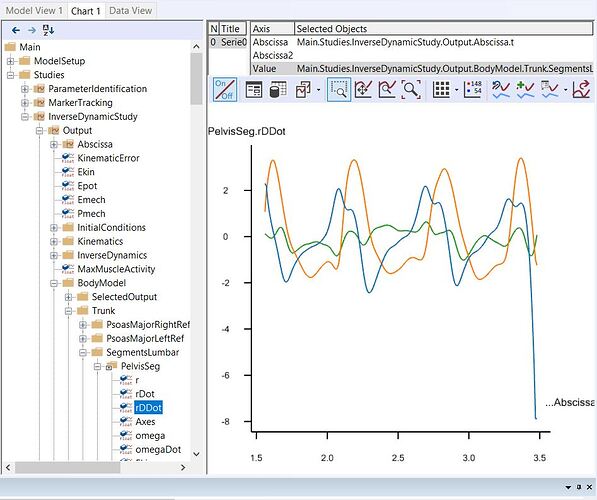 it looks very low acceleration values. And considering the small mass of the pelvis (normally under 1Kg), the inertial forces should be very low values compared to the other forces associated with the pelvis.

I investigate gait stances: LHS, and RTO as attached. 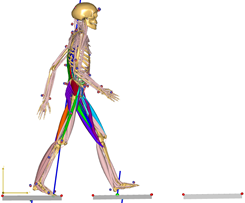 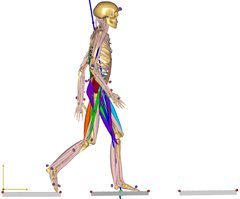 Is there a direct way to extract these inertial forces, pelvis weight and kinematic errors?

There is a way to remove inertial forces - check *INERTIA RELIEF. Please read the FEA manual for details on how to apply it.

Regarding the residual forces - they are quite large. Do you observe them in FEA? Or in AnyBody? Could you specify how you measure them?

Marker errors can be found in the marker drivers, for example (in Chart View):
Main.Studies.InverseDynamicStudy.Output.Markers.LPSI.Driver.Pos - it shows the experimental vs model-optimized position of the marker.

Inertial forces should be Mass times accelerations. Mass is around ~10kg. The segment mass contains soft tissue masses as well. You can double-click on the pelvis segment and find PelvisSeg.Mass.

The residual forces are calculated based on the exported forces from AnyBody. I export all muscles and joints' contact forces of the pelvis in terms of its directional components in (x,y,z). By applying a summation of each component for all forces together, there is a residual in x, y, and z.
This is expected because inertial forces weren't included in this equilibrium summation, however, if this residual represents the ignored inertial forces, it is still high?!!

Even a 10kg mass of pelvis segment with low values of acceleration (2 m/s2) results in almost negligible inertial forces exerting on the pelvis during normal walking.

The exact same values are obtained in the FE model as the reactions at supports. This is expected as it is still a result of static equilibrium of the forces' directional sum.

Could you show the code for computing this? I have a suspicion that you miss something.

Then it is very likely that you miss something less obvious than muscle forces and reactions. Look into AnyMechOutputFileForceExport to get full output, check the manual how to use it.