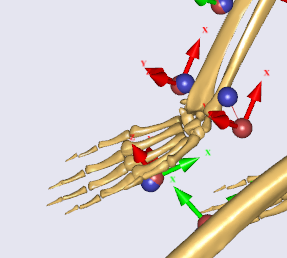 Why the hand palm is loaded rotated 180 degrees w.r.t. wrist joint?
During the parametric identification study, it loads normally, however, in inverse dynamics it loads rotated 180 degrees compared to its normal posture!
Such a movement is beyond the wrist joint range and it causes failure of the analysis.
What is the reason behind this abnormal behaviour?

It could happen because the right-left wrist markers are flipping during acquisition or kinematic optimization found a wrong solution. This happens quite frequently - nature of the reflective markers. To solve this we either use a soft constraint on the wrist rotation or fix it completely (depends on the application). For example, if you focus on the hips - wrist rotation and flexion could be just fixed.

If you need accurate hand movement - you would to reduce the weight of those wrist markers and introduce the soft driver for wrist rotation (use default mannequin driver).

Thank you for the response.
Moving the initial mannequin to have a similar posture to the initial frame solved the problem.
However, I still don't understand why we still have to move the mannequin as close as to the posture in the initial frame of the recorded C3D file as long as the parametric identification study was conducted successfully without the need to do that?!

It's inconvenient to have to do this step of reorienting the mannequin to match the initial frame of each recorded C3D file!!

As i mentioned before, the system optimizes movement of the skeleton to the provided data. Generally speaking this optimization is robust, but not 100% bulletproof - there are certain scenarios where optimizer will converge at a local minimum instead of global. Bad initial guess, ambiguous input data are among those factors that could lead to "bad" optimization.

For example, if you focus on the hips - wrist rotation and flexion could be just fixed.

Actually, this is the case, my focus is on the hip.
How to fix the wrist joint?..or any other joints which are out of interest?
Should I tune the values of sRelOpt?

At the moment I turn off Opt in all directions of the marker.