Hi,
is there a possibility that the long axis of my WrappingSurface (Cylinder) rotates relative to a moving node? Would you give me an example for the definition of Arel?

Please let me know if you need any further explication. Thank you in advance for your help.
Best regards,

I am not completely sure what you are trying to accomplish. In general AnyRefNodes ( and hence wrapping cylinders) are completely fixed to their segments. So the very short answer is no.

But you can have wrapping surfaces that moves by attaching them to segments which you then rotate or move using some kinematic driver. So what ever you are trying to accomplish is probably possible

Thank you for your answer. And I’m sorry I didn’t know how to explain my problem. I want to attach the wrapping surface to two nodes instead of just one. Is that possible ?

I want to attach the wrapping surface to two nodes instead of just one. Is that possible ?

Well, sort of. You can use two nodes to define the orientation of the wrapping cylinder. But cylinder can in principle only be placed with respect to a single coordinate, and it will always have a fixed position relative to the segment it is defined within.

If you asked if a cylinder can be attached to two nodes on different segments then you need another approach. One where you use a dummy segment (with zero mass) which has a driver orienting it between the two nodes and then place the cylinder on that segment.

Exactly, I want the cylinder to be attached on two nodes placed on two different segments (with mass). For the first node there is no problem. But I thought that I could attach it on the second node if I change the direction (ARel) to be allways towards the second node. Could you give me an example for your approach?

Thank you very much for your help! 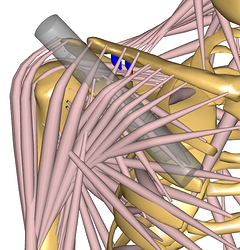 So a dummy segment is added and attached to both the thorax segment and the scapula segment. E.g. the origin and insertion of the pectoralis minor muscles.

On to that dummy segment the cylinder is placed.

You can see the implementation in:

In one end, the dummy segment is attached to the thorax with a spherical joint which constrains 3 DOFs. In the other end, two DOFs are constrained to make the segment point towards the insertion of the Pectoralis Minor muscles on the scapula. Finally, the last DOF (the rotation along the long axis of the segment) is constrained.

It may seem a bit cumbersome way to do this. But it ensures that the forces on the segments transferred correctly on the two other segments on which the dummy segment is attached (for example from the muscles wrapping the cylinder).